Unlike the Anglican Chapel this Chapel has suffered some more unfortunate events in its life including theft, fire, vandalism, and fire again. Nonconformists preferred their places of worship to be more austere, classical and having an uncluttered interior. This is reflected in the greek architecture of the Chapel, inside the space was open and light with plaster finishing and timber panelling from floor to dado. The outside has an imposing entrance flanked by two fluted ionic columns supporting an entablature and pediment; there are two side wings that would have had a roof when first built. John Taylor constructed this building along with the boundary wall that fronts London Road. As early as 1852 the Cemetery committee minutes note that in October of that year lead is stolen from the roof; in March 1884 there is a report of a fire in one of the side wings that was used to store tools and dynamite which was used to blast holes in the stoney earth for graves. In 2006 the worst fate befell the chapel when youths set fire to it and the roof and timbers were completely destroyed along with the whole of the panelled interior. For a couple of years the chapel looked a sorry state an empty shell surrounded by a fence. Luckly English Heritage and Coventry Council got together the finances to replace the roof make the building secure and remove the graffiti from the walls. The chapel happily now looks as impressive as it always did in previous years. 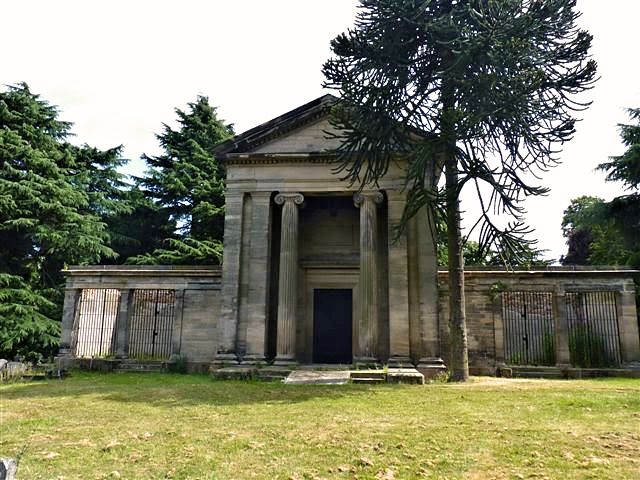